Mosquito Larvae - Mosquitoes lay eggs on water or damp soil. There are a wide variety of mosquito species, but most will generally lay their eggs side by side to form this floating raft, which may contain 100-400 eggs. It will take about a week for the eggs to hatch, where they become what most people call 'wrigglers'. The larvae looks like a hairy 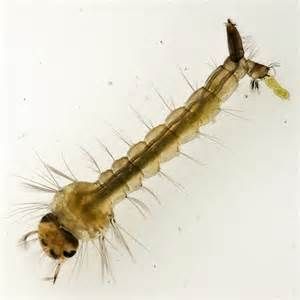 worm  with a round head, soft body, segmented abdomen and a siphon tube. The larvae will use this siphon tube to poke through the water surface in order to breathe. In the larvae form the mosquito will molt four times. They will grow larger after each molt. This form will last between 4-14 days - depending on the species. The next stage in the mosquito cycle is the pupa, also know as 'tumblers'. This stage will take between 1-4 days - again depending on the species and the temperature of the water. After this comes the adult stage, where they will only live for about two weeks.

Dragonfly Nymph - Dragonflies will lay their eggs on aquatic plants or in the water. Eggs will generally be laid in still water as moving water runs the risk of the eggs flowing into fish-feeding areas. The female Dragonfly can lay hundreds or thousands of eggs in her lifetime. Eggs will hatch within five days if the climate is right.

If it is too cold the eggs won't hatch until spring comes around. When the Dragonflies hatch they are known as Nymphs, which do not resemble the Dragonfly in any way and are voracious predators. They feed on other insects, crustaceans, worms and small fish. They have brown and green coloured bodies that allows them to camouflage better to help catch their prey with their pincers. They have a wide oval-shaped abdomen that has three pairs of segmented legs on either side of the upper body. The Nymph will live in the water until they molt to adulthood, they can molt up to twelve times - depending on the species. The Nymph will grab hold of a plant or surface to move out of the pond for its last molt. The climate will determine how long the Nymphs are in this stage, it could take a month in warmer climates or several years in colder climates.

Water boatman (Corixidae) - The boatman is found worldwide and can generally be found in most freshwater environments. Water Boatman have a flat, elongated body with long oar-like hind legs. They tend to be dark brown or black with a number of narrow, parallel cross-lines on their body. Boatman feed on other insects, such as mosquito larvae, algae and aquatic plants - This can vary between species. Females will lay eggs on

submerged plants, rocks, sticks etc. The juveniles look like the adults, but are without wings. Before becoming mature adults the Nymphs will molt at least five times.  Boatman will spend the majority of their life in freshwater environments and can sometimes be seen swimming in clusters. They are harmless to other pond life, but may become part of your fishes diet.

Water Strider (Gerridae) - Also known as a Pond Skater, Water Skipper, Jesus Bug or Skimmer. These critters are fascinating to watch as they glide on the surface of the pond. Click Here to see them in action. There are a number of factors that allow them to walk on top of the water, the main ones being their hydrophobic legs and the high surface tension of water. They are likely seen in still water ponds or found at the edges of calm moving water. The Strider uses its front legs as sensors to pick up vibrations from ripples, created by insects who have fallen onto the water surface, to find their prey. 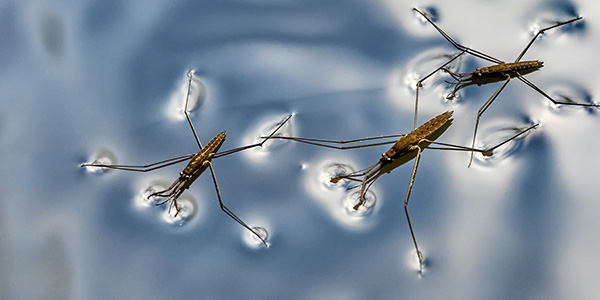